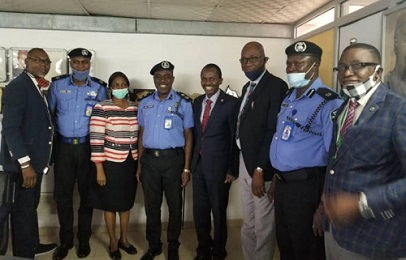 The Group Managing Director/ CEO of Odu’a Investment Company Limited, Mr Adewale Raji, has reiterated the need for a conducive and safe environment for economic activities to thrive.

In achieving this, Odu’a GMD said that it would continue to partner with the Oyo State police command to fortify security network in its area of business operations.

The Odu’a boss stated this at a visit of the new Oyo State Commissioner of Police, Joe Nwachukwu Enwonwu and his team to Odu’a Group Headquarters on Thursday, June 25,  2020.

Mr Raji commended the new police boss for the visit, saying it showed his commitment to the business community in the state.
“We will also continue to support the police as we have been doing, thereby, strengthening the relationship between the two organizations for the benefit of the people,” the Odua boss said.

Mr Raji noted that in curbing the high rate of crime in the society, most people needed to be economically engaged so as to reduce the number of people involving in crime

The GMD said that the Odu’a Board in alignment with the drive of the owner state governments to unlock value in the Agriculture value chain in the South West, is committed to operationalising the South West Agricultural Corporation Limited (SWAGCO) by end of June 2020.

He noted that a new dawn has started in Odu’a as management and Board are committed to creating shareholders value with social impact as the company is poised to fulfilling its mandate as the engine room for economic development of South Western Nigeria.

In his remarks, CP Enwonwu assured that the police under his command would continue to maintain peace in the state in order for businesses to thrive.
Enwonwu, who commended the entrepreneurial spirit of residents of the state, said economic activities would be grounded in an atmosphere of insecurity.