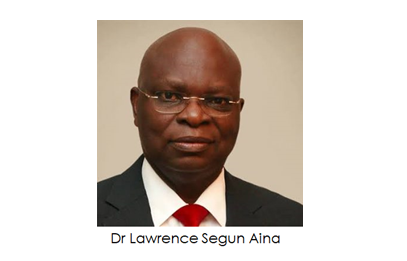 Dr Segun Aina, Former President of the Chartered Institute of Bankers of Nigeria (CIBN) has been appointed, Chairman, Board of Directors, Odu’a Investment Limited.

The Head, Corporate Communication and External Relations of CIBN, Mr Nelson Olagundoye, said in a statement on Wednesday in Lagos, that Aina’s appointment was approved by the South-West Governors’ Forum.

“The appointment was approved following the reconstitution of the Board by the six governors of South West states, the owners of the company, led by the Governor of Ondo State, Rotimi Akeredolu.

“The new board, which has since been inaugurated is charged with the responsibility of restoring the lost glory of the company and repositioning it to realise the objectives of its founding fathers,” he said.

Olagundoye said that Aina’s appointment to the position was an indication of the confidence the South-West Governors’ Forum had on him.

According to him, the forum has no doubt that under his leadership, wisdom and guidance, the company will strive to much greater heights and achievement.

Aina, who will be representing Osun State on the Board, is a global professional banking leader, internationally rated fintech influencer and thought leader, respected Futurist and a Philanthropist.

Until his appointment, he was the Chairman of Global Council of Global Banking Education Standards Board (GBEStB), and President, Africa Fintech Network.

He has also served as the President/Chairman of Council of the Chartered Institute of Bankers of Nigeria (2012 -2014) as well as West African Bankers Association (Nigeria Chapter) 2001, among others.